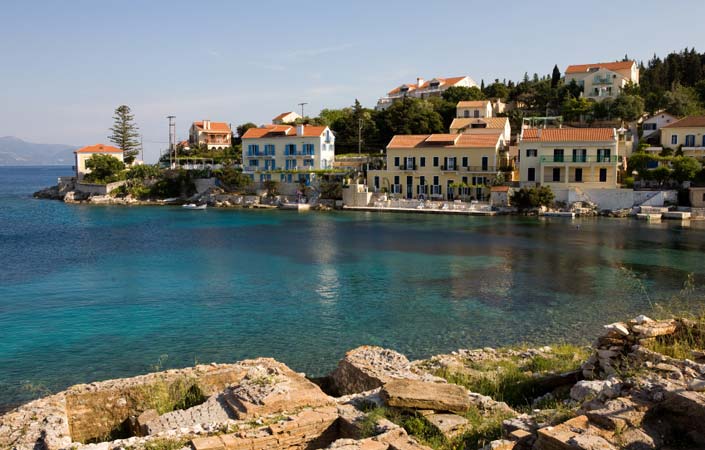 The bigger island of the Ionian Sea. Its nature is a pleasant surprise to the thousand of visitors that come to the island every year. The natural caverns, the curious rocks, the strange beaches, the green hills, the beautiful lakes, fascinate the visitors. Kefalonia is an ideal place for those who want to rest and for those who love to explore the nature.

The residents are distinguished for their hospitality, their cleverness, their humour and the choral songs. They are people who managed to spread around the world, distinguish and get rich.

According to a legend Kefalonia took its name from Kefalos who turned away Tilevoes, while Homer called it Sami and the residents Kefallines, a name attributed generally to the citizens of Odysseus. Kefalonia flourished during the Mycenaean period and later in the 5th century B.C. with the Kefalinian “tetrapolis” which constituted of four cities-states, Pali, Krani, Proni and Sami after the names of Kefalos sons. Wars force the residents to fortify the island with walls and castles. During the Roman occupation and the Byzantine period the island decays. Various conquerors follow like Normans, Venetians (an era characterized by intense economic and cultural growth), French, Turks, English and finally in 1864 Kefalonia is united with the remainder Ionian islands with Greece.

All conquerors left their marks and contributed to the creation of the particular Eptanisian culture, with traditions, customs, songs, dances and linguistic idioms that we do not meet in other parts of Greece.

Kefalonia is the island of N. Kavadias, Marinos Antypas, Andreas Laskaratos and innumerable other old and modern leading poets, litterateurs, musicians, painters and in general as they are characteristically called “uneasy spirits”.

By Ship
From Patra, Kyllini and Astako

By Bus
From Athens and Patra

Kefalonia prefecture administratively belongs to the Region of Ionian Islands and consists of Kefalonia and Ithaca municipalities.