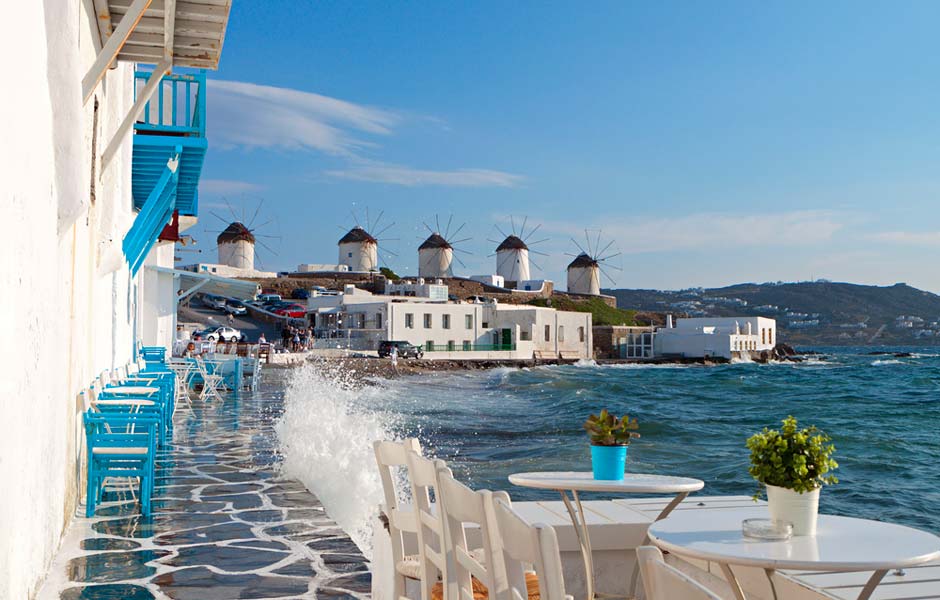 Mykonos is the most famous Greek island, a cosmopolitan location with fanatic visitors from all over the world.
Mykonos is a meeting place for VIPS from all over the world. An island of small white Cycladic houses, picturesque alleys, urns of jasmines and bougainvilleas, golden sandy beaches, the windmills and the picturesque “small Venetia”. At Kastro visit Panagia Paraportiani, a complex of five churches, a characteristic sample of traditional architecture.
Mykonos beaches as Psarou, Platis Gialos, Kalafatis, Ftelia, Elia, Agrari, Panormos are of unique beauty and gather each year a significant number of visitors. All day time the alleys are full of people coming in and out of the shops, savouring tasty mezze at the restaurants.
Close to Mykonos stands Delos, one of the biggest archaeological sites in Greece. Boats from Mykonos transfer on a daily basis many tourists to the legendary island, who upon their departure take with them photographs of the ancient Greek glory.

By Ship
From Piraeus port, Rafina port and the surrounding islands

Any cookies that may not be particularly necessary for the website to function and is used specifically to collect user personal data via analytics, ads, other embedded contents are termed as non-necessary cookies. It is mandatory to procure user consent prior to running these cookies on your website.